Even long shots make it 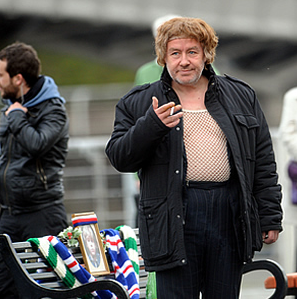 "Sentimental" is a word the powerful use to repudiate the weeping of the weak. In nineteenth century Britain, for example, the Irish were seen as sentimentalists, willful lovers of melancholy and booze rather than victims of famine and colonialism. Similarly, the fashionable modern view of Dickens is that he was a great comic novelist, but one with an unfortunate weakness for sentimentality; if only he'd spent less time believing in the possibility of human kindness and moralising about the plight of the poor, so the argument goes, he might have made it to the level of Shakespeare and Dante. Obama is sentimental. Socialism is sentimental. Occupy is sentimental. Love, generosity, music, tears, Kevin Keegan, solidarity, poetry, pop music, feminism, folk music, sadness: mere sentimentalism in the eyes of cultivated realists.

But there is another way at looking at sentimentality. Maybe when a book or a song or a film appears sentimental, this is because someone is trying to communicate some kind of ineffable tragedy or absurd dream of hope. Maybe they are trying to make the truth sing through the available cliches even though they know this will always seem hackneyed and painfully inadequate so long as the powerful are able to define the parameters of respectable sophistication.

"Don't Come Home Too Soon" by Del Amitri (the official Scottish national football team tune for the 1998 World Cup in France) is a sentimental song. Its mood is mawkish. Its emotional plea is blatant. The string arrangement is consciously "epic", and the snailtracks of Britpop conservatism cover its formal surfaces. That acoustic guitar strumming pattern (chang-chang-chikky-chanka-chang-chang) was surely one of the worst things to happen to the world in the nineties, and its presence in the foreground here confirms this song as the very archetype of cliche and obviousness. Blame Kurt Cobain. And Richard Ashcroft. And late capitalism.

Yet "Don't Come Home Too Soon" is a great song. Ezra Pound said that the beauty of art is a brief gasp between one cliche and another, and this is a tune full of such gasps. Justin Currie's voice might be the epitome of MOR, but you'd have to have a heart of stone and ears of rubber not to appreciate his rounded, enveloping timbre here. The two and three part harmonies are frequently sensational. The guitar chords are rich in spite of their clunking rhythm. And there are continual surprises in the shape of the melody: ornate little hooks and mini-refrains keep popping up at unlikely moments ("that stupid plane", "you might prove them wrong", "I don't care what people say", "even long shots make it").

And then there's the subject matter. The football tournament song is not known for being an especially fertile genre in pop music. Yet here it has been transformed into something unique and remarkable. Just to be clear about exactly what is going on here: this is the pop song as a poem including history ("so go then out into history"), a national epic that draws on a tradition of Romantic heroism, a love lyric, an elegy. This is a song about realising with certainty that you are going to die, and an attempt to view that death as somehow an occasion for communal hope.

This is a very strange and unusual piece of music, sentimental but wildly complex at the same time. It is an attempt to derive empowerment from failure, which seems to me to be the essence of spirituality. And I reject utterly the notion that this is some sort of slave morality or victim complex. Religion is not or not only opium. Marginal peoples do not choose to be victims or accept victimhood; rather, they use belief as a means of humanising themselves and creating the imaginative space that is a precondition of one day attaining to real autonomy and independence.

This is the power of sentiment, and this is why I'm hopeful for 2014.


(This is the only video I could find, but it seems somehow appropriate.)

it's got really quiet round here...

I'll be back with some shit in March, but until then:

You all need to get your arses in gear!

I fear I killed the craic with Del Amitri ...

We could do with some new blood. It's been a year now eh?