For several years during various stints on a business-led Middle East/North Africa magazine, In Amenas represented little more than a pool of data – owners-producers, capacity, products, pipeline routes, end-users (broadly, us in Europe) – that’s what we cared about and reported with repetitive monotony. We could be lulled into false assumptions about its security because, like many such installations in the region, it was a militarised industrial complex in a remote outpost of a huge country used to dealing brutally with terrorists. No danger here, we effectively told subscribers.

Last week’s attack on the workers and the plant, by a bunch of Maghrebis (and, er, Canadians) pledging allegiance to a stateless cause where Salafist beliefs provide the veneer of a crusade (as if one were needed) against western geopolitics, shattered all those illusions. The numbers, around 40 hostages killed alongside 30 kidnappers in nearly five days’ worth of assault and counter-assault, are not as grim as some 90s/00s bombings. Unlike 1998’s East Africa embassy blasts, 9/11, 7/7, the Bali bombings, etc etc, this attack, on a remote plant 1,000 miles from Algiers, was a largely unseen event; in the early hours news editors, especially television editors desperate for images and movement, were forced to make assumptions and perhaps push the story too far on the basis of faintly credible sources. But the fundamentals of the event – a not-quite-successful kidnapping and a ferocious but bungled response – provide for a deeper narrative and strong resonance. 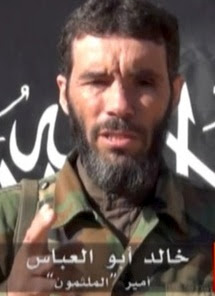 Despite the frustrating invisibility as far as insatiable western media were concerned (leading to an over-reliance on talking heads playing guessing games), there was still more than enough fodder for the endless war on terror (as Phil says, our politicians know no different) and what Cameron has proclaimed as a ‘generational struggle’ (conveniently in a theatre-galaxy far far away). We had the archetypal bad guy, ‘the Uncatchable’ Mokhtar Belmokhtar. Like Bin Laden too wise to actually be there, he was said to be a ruthless veteran of Afghanistan (must have been making the green tea; could have only been about 12) and Algeria’s civil war. We had old players in new situations – not least an Algeria frustrated its Mali peace initiative failed and then reluctantly drawn into it by offering up airspace. We had new motives – not just the broader motive of revenge for French action in Mali, but Belmokhtar’s coming out (!) as leader of a breakaway group. Thus we had new blood curdling names to assign fear to – Katibat al-Mulathameen (Masked Brigade), Those Who Sign in Blood or Signatories in Blood. All this combined with the grisly accounts of survivors.

While the ostensible aim to rush expats out to remote hideouts inevitably twisted into holding a huge industrial complex to ransom – that plant carries way more capital than a few hundred expendable staff – the ‘fluid’ dynamics of the attack resulted in a weird meta-collusion between Algiers and the attackers. A plant producing 10% of its energy and crucial in providing the revenue that keeps Algerians in subsidies and therefore more politically quiescent, gave Algiers little choice in how to deal with it. That made the jihadist raid effectively a suicide attack – attacking a complex like that could only result in a brutal reprisal, despite initial western dismay. Everyone knew the stakes. There was also perhaps an embarrassed realisation that the local security forces’ reaction at the start had been less than the iron fist we’d expected of fortress Algeria. It is worth emphasising here Algiers’ approach to the expat workers who some view as mercenaries working for first-world companies exploiting developing world resources. They were destined to end up as collateral, the ultimate price of a well-paid but highly alienating spell in the desert in the pay of majors such as BP.

‘Once again the good ol' Global War on Terror (GWOT) remains the serpent biting its own tail … As blowback goes, [Mali] is just the hors d'oeuvres’ - Pepe Escobar 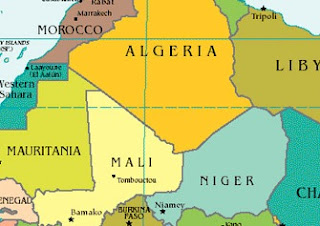 So for all the talk of shutting down the Islamist threat, quixotic and inconsistent western policy shows a remarkable capacity for opening up new fronts, in weird double-step with the Islamists they denounce. While in Syria we have seen bearded warriors actively given time, space and materiel to mess up the Shia crescent, Mali was something experts had been warning about with increasing noise since Islamicised Tuareg fighters came back with loads of gear from Libya - more Arab spring blowback to consider there. Though a counterinsurgency campaign would doubtless have won sympathy with those world heritage sites and the region’s beautiful music at threat (Damon Albarn will lead the campaigning here), the west looked on as Mali’s defence structures imploded with a weak coup led by leaders nonplussed at defending the north.

What the geopolitical analysts are talking about now is a cross-Sahel force of Al-Qaida aligned fighters, bringing the pain for diverse reasons: some localised and further afield such as Somalia; others more vaguely for the ‘cause’; still more mere fronts for cocaine, cigarette and people trafficking. Such ‘existential’ crises can be pretty brutal for some. But all in all cause enough to keep the military industrial complex well funded and focused on picking nonsensical fights for decades to come.

‘I’ve never written about Welsh identity before: these days, I’ve got to search for things to write about, whereas in the past everything would be driven by anger and all the rest of it. Now I’ve got to delve more… Ready For Drowning is the most complete song I’ve ever written, I think…’

After Everything Must Go, This is my Truth Tell me Yours is the best album of a mediocre bunch – even with its overblown and airless moments, even with Wire’s retreat behind domestic lines and po-faced earnestness replacing their early half-articulate, all-encompassing ire. Ready for Drowning is perhaps not the best but the most interesting song on the album: its rippling chapel-service introduction; Bradfield’s precisely rendered Valleys diction on the line ‘Said ‘e’d y’eard it in a tacsi’; the second verse’s disappointing touch of that chronic Nineties disease whereby ‘proving you care’ feels like more of an imperative than actually caring; and the climactic sample, amidst the song’s drunk-sounding central lurch, of Richard Burton’s misanthropic telekinesis master in The Medusa Touch. As the early Manics were and remain a band only a teenager could properly love, so this, their first album produced entirely post-Richey, is inescapably the product of a band forced to grow up, but unsure what to grow into – a state reflective of, among other things, the post-industrial stasis and stagnation still affecting much of their homeland.

Released in 1998, This is my Truth is a deeply Welsh production. Its cover photo was taken on Black Rock Sands in Gwynedd, a tourist-friendly beach which in the cover shot manages nevertheless to look as desolate and featureless as an abandoned slate quarry or the surface of the moon. The album quotes, references or eulogises Aneurin Bevan; the impressively irascible North Wales poet and Anglican priest R. S. Thomas; and the Welsh who left to fight fascism in 1930s Spain. In 1998, of course, at the end of a decade marked by the pushing of confected ideas of ‘Britishness’, ‘Welshness’ was also getting big (everything’s relative). As explored in Wales Off Message, Patrick Hannan’s occasionally amusing compendium of devolutionary culture and its cock-ups, the taking root of specifically Welsh political institutions gave rise to broader debates on how national identity was to be characterised and defined. The Welsh Assembly’s establishment took place alongside a very Nineties shift of focus from economic issues to the nation’s performance on various cultural stages; for Wales, this meant a cathartic concentration on the national team’s improvement on the rugby pitch and the consolidation of a dubious ‘New Welsh Cool’, based around the sudden commercial success of the Manics and the emergence in their slipstream of other Welsh bands of varying quality and longevity.

Around the time of this album the Manics, never having previously appeared to endorse flags as anything other than combustible material, began draping their amplifiers and themselves in the red dragon. But, just as 1994’s The Holy Bible had been a refusenik splinter in the side of Britpop, so in Wales, when everything surrounding This Is My Truth seemed to indicate a post-Thatcher, post-imperial, post-devolution sigh of forward-looking relief, the Welsh album of the year was steeped in backwards-looking pessimism, quietly if resentfully resigned to despair, and old before its time. Well, of course it was. It’s Welsh.

In late-90s South Wales at least, the experience of having had work first defined as one’s purpose for living, then abruptly removed but not replaced with anything meaningful, was cemented by the shallowness of Blairite triumphalism, which, despite Kinnock’s unenviable place as New Labour’s handmaiden, had little time for Wales. The dispiriting and bathetic micro-machinations surrounding the attempt in 1998 to impose Alun Michael as London’s man in Cardiff, against Rhodri Morgan’s positioning as the people’s choice, exemplified this distance. In addition, New Labour’s post-socialist direction and the Welsh Assembly’s lack of tax-raising powers both militated against any commitment to concrete economic improvement. No longer condemned to an industrial past, vast swathes of the country remained condemned to a post-industrial future, against which the New Welsh Cool rang as hollow as a lot of other Nineties rhetoric. Against this backdrop, Ready for Drowning has no solutions and little hope to offer, in accordance with the quietly bleak defeatism, resignation and pathos that riddles the album.

On This is my Truth, lacking roots in older, more established ideas of Welshness tied to custom, place and language, Wire’s casting around for a secure identity finds him latching on to specific traditions of Welsh political history. From the Bevan quote in the album’s title to Welsh participation in the Spanish Civil War, these aspects of Welsh identity are more modern than ancient, more southern than northern, and more industrial than agrarian. They are also, crucially, based in class rather than national consciousness, and they are, equally significantly, things of a heroic and romanticised recent past – stuff of history rather than myth, but just as irrecoverable. The album derives its few comforts and securities from the past, reinforcing the present lack of either. Ready for Drowning, like If You Tolerate This…, is almost unbearable in its yearning for what’s lost – for principles, potential and power that, by the end of the twentieth century, were all over bar the shouting.