The Rich Being Rich

“I believe in the rich being rich and looking after the poor, because in my experience, the poor cannot look after themselves”

In the spirit of recent-ish moves towards a proper understanding of conservatism, I thought I’d take a look at a BBC documentary on his party by late Tory pinup Alan Clark. It was made in the immediate aftermath of the 1997 general election and the end of 18 years of Tory rule. Indeed, one of the first shots is Clark standing outside a desolate Tory election soiree, with chants of “You’re out, and you know you are” echoing behind him. Interestingly, Clark is already talking in the past tense about events happening as he speaks. 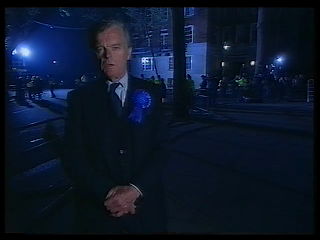 Clark’s thesis is that the origins of this Tory defeat go back “to when they first became the party of government, in nineteen-twentytwo-oooo”. Implicit in his argument is that the sexism and snobbery that many would see as intimate to the party were the flaws that allowed both for the spectacular rebellion of Thatcher, but also caused them to lose to a man who publicly distained such discrimination while remaining essentially conservative: Tony Blair.

Clark sees the rebellion that caused the Tories to split from Lloyd George’s Liberal coalition as marking the foundation of modern Toryism. “The toffs and the grandees suffered from that customary illusion of politicians: that they were indispensable”. An ability to change – “that innate sense of self preservation”, Clark calls it – is what kept them in power.

The programme came out at the beginning of a long period of Tory weakness, and there’s a sense that many of those being interviewed know it. This allows for a frankness that suits Clark’s aristocratic self-confidence, a trait that caused him to be at the centre of many political gaffes when in office. While it’s difficult to call a man who speaks in full, recursive sentences plain spoken, he is less concerned with being “on message” than most politicians. The programmes introduction for instance, intercuts various members of the Tory fellowship defining Conservatism. Peter Carington merely replies bullishly, “What does everyone else say?” Clark on the other hand is able to gesture towards something central to modern conservatism: the belief in fairness within a strict hierarchy of class inequality. This enables new blood to gain positions of power and enact the radical changes necessary to preserve such a hierarchy.

There are other revealing moments. The quote at the top of this post comes from the slight, cigar-smoking Lady D’Avigdor-Goldsmid, who is subtitled as a “friend of Lord Beaverbrook” (as is Michael Foot, who wears his arm in a sling). Her remark reflects a deep, prevailing attitude in the Tory Party and indeed the whole political class. It could be said by any minister today, but only behind closed doors. Again in the intro, Nigel Lawson describes the Tories as kind of ideological police force: “If you didn’t have any criminals, you wouldn’t need policemen. And in the same way, if you didn’t have people going about with damaging political ideas and nostrums, you wouldn’t need the Conservative Party”.

As Clark stiffly minces around private clubs and his stately home – all tinted a sickly 90s VHS sepia – he frequently reiterates the point that for the history of the Tory Party in the 20th century, anyone, even aristocracy and royalty, were disposable. He also gives us entertaining anecdotes, like the one about Lord Curzon, who lost out the office of Prime Minister to Stanley Baldwin, who remarked while seeing British soldiers bathing in Palestine that he was surprised that “the lower classes had such white skin”. Clark sees Curzon’s failure to become PM, despite being Viceroy of India and Deputy Prime Minister, as marking a sea change in the Tory Party, where power moved from the aristocracy to the bourgeoisie.

From here he narrates the history of the party, but it’s not until he reaches the seventies that things become particularly relevant for us. He mocks Heath, a “replica Wilson”, for not being good at economics at school. His damming verdict of the man is that his government was “one of the most frustrating and melancholy interludes in the whole history of post-war conservativism”. Heath “had not the slightest idea of what he wanted to do” and “his objectives were often couched in language so obscure as to mislead the author as well as the audience”.

It’s here that Clark, in his attitude more than anything else, describes the conservative commitment to the sublime. The sublime is a harsh glory. It doesn’t involve getting your hands dirty – not literally at least – but it is a brisk toughness that opposes the comfortable and safe. Clark helpfully reminds us – despite it being “hard now to remember” – “just how powerful and disruptive the unions were in the nineteen-seventies”. Heath “didn’t have the muscle, political or economic, to meet the unions head-on and win”. Thatcher did. 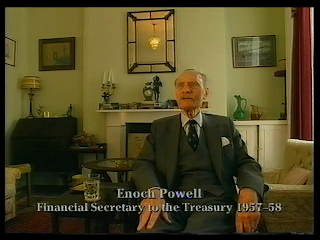 This economic “muscle” is foreshadowed in an earlier episode by a spectral Enoch Powell, who dismisses Macmillan’s belief in planned economies, Keynesianism and that Macmillan “never accepted the monetary theory of inflation”. Powell says all this like Jacob Marley haunting Scrooge. This is fitting, as Powell’s ideas on economics and immigration haunted both the Party and the political class in general, then and now. As Clark points out, Powell’s jabs show that Macmillan was “far more left than New Labour today”.

Clark summarises the goal of Thatcher’s right hand man Keith Joseph as being an avoidance of “the ratchet effect”. That is, there was a need to reverse the polarities of British politics from socialists pulling left and Conservatives “content with the status quo”, to it being Labour “who had to apply the ratchet, while Conservatives were deciding which way the wheel must turn”. Clark delivers these lines as the camera swirls around him melodramatically in a 360 degree pan. There is a faint smile on his lips. 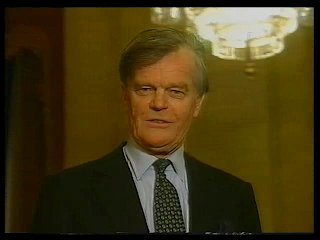 It’s the last half of the series that is most relevant to today, with its Tory-centric perspective of the struggles of the 80s and the illusions of the 90s. Despite Clark’s dogged and insipid devotion to Thatcher, there’s a number of interesting moments. Clark makes the surprising claim that “without North Sea oil, there could have been no Thatcherism”. And Jim Prior quotes Thatcher as saying “the problem with the middle of the road is that you get knocked down by traffic from both sides”, something the Labour Party continually fails to notice today. Sometimes the programmes aesthetic flourishes become ridiculous, like when the screen is tinted red during scenes of the miners’ strikes. To shots of policemen grappling protesters to the ground, Clark stonily intones “the conflict made [Thatcher] more determined”. The sublime at work.

However, Clark is candid about Thatcher’s tactic of using revenues from North Sea oil to pay for unemployment. Despite relishing the defeat of the miners, he calls the economic strategy “wasteful”. Convicted criminal Conrad Black makes an appearance to say that it was important to the press that “the government […] would not tolerate illegalities in the manner that some previous governments had in industrial relations disputes”. Thatcher could count on support from The Telegraph.

On the defeat in 1997 the programme says very little. John Major insists that the country is “apolitical”, but Ken Clarke puts it well when he says that during the 1997 election the Conservative Party itself “was the main subject of the debate. Not our policies. Not our ideas. We’d already won the battle of ideas – our policies were imitated by our opponents.”

None of this, I suppose, is new. But it’s interesting to see it articulated in 1997. Clark’s thesis of pragmatic Conservatism is a persuasive one. But he reveals the superficiality of his argument when he says,

“Most Tory MPs are not preoccupied with ideology. They seldom read the manifesto and indeed I don’t myself. So I don’t see the arrival of Thatcher as being a break from the pragmatic, power-driven tradition of politics that dominates this story.”

Self-interested scheming and compromise does indeed drive politicians. But that does not make them immune from ideology, whether they read press releases or not. Missing from Clark’s story is the world outside the corridors of power. Why the trade unions called strikes or why post-war politicians were committed to Keynesianism is barely hinted at. This view of politics as personal power play dominates official discourse. It’s why all of Westminster loves The Thick of It. It’s also why politicians are so totally out-of-touch with ordinary people and why they rarely stray from their bubble of big business and the 24 hour news cycle. In Clark’s view of the world, politicians are individuals like everyone else; they make pragmatic, commonsense decisions, usually for mundane personal reasons. That he can’t see this as ideology is because he is blind to it.

So it’s strange that Clark doesn’t consider Thatcher to be a true conservative. She didn’t stick to a manifesto idea of conservatism, but she favoured the rich and the privileged and saw inequality as necessary and good for it promotes “excellence”. Perhaps Clark overlooks this important aspect of the appeal of conservatism because, as an aristocrat, they do not touch him as viscerally as they do those outside of high privilege. Either that or he’s repeating the usual received opinions about conservative politics. Clark wants Thatcherism and traditionalism, but he can’t have both. 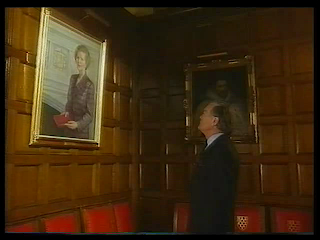 There are two lessons to be learned from the history of the Tory Party. One is that power plays, backstabbing and scheming are a necessary part of politics. The other, more important lesson is that low cunning is not enough: if you are content with appealing to the status quo, you will be destined to be directed by others who control the wheel.

I’ll give Clark the last word, as he seems to be describing not just the Tory Party, but the limits of the imagination of the current political class:

“Since 1922 the Conservative Party had been the natural party of government by stressing unity and consensus, always preferring pragmatism to ideology. Yes, the Party had its greatest electoral successes during the Thatcher years, when it abandoned this formula, but by demeaning the public sector, crushing the unions, and crippling local democracy, great damage had been caused to the traditional fabric of the nation state. In May 1997 they paid the price.

“There is now little left but question marks. How must the party change? Should it return to the One Nation tradition? Or should it push further out with a radical right wing agenda? To whom can it look for leadership?

“In 1922 the Conservatives had found rejuvenation, breaking away from a coalition that was exhausted and out-of-touch. Now the Party is in that same position itself. How feasible is it going to be for them to repeat their achievement of 75 years earlier?”
Posted by Oliver at 00:37 4 comments: