Our way of life is non-negotiable

1. As the Tao Te Ching makes clear, the inherent processes of life will always regularly produce perverse phenomena (the irregularities that must emerge from the confluence of different regular phenomena).

2. These perverse phenomena will always be intensified in societies whose behaviours and manners of cultural expression are accentuated by the application of abnormal levels of (fossil-fuel derived) thermal energy.

3. Those that accidentally gain the greatest benefit from the introduction of the perverse phenomena will attempt to regularise them via ideological myths that stress their inevitability, necessity and normality.

We live round here too (oh really?)

All of Pulp's contradictions are brought to the fore in the 1995 single, 'Mis-Shapes', where the relentless momentum of 'Common People' takes on a newly insurgent tone. If Pulp's mid-90s records are best understood as a South Yorkshire retooling of disco, then 'Mis-Shapes' is their 'Ain't No Stoppin' Us Now' – a statement of triumphant collectivity against the odds. It bottles the giddy feeling that 'we' were on the move that accompanied both Britpop and early Blairism, and the knowledge of what false dawns both were is bound to colour any listening today. Not incidentally, it's a song the group themselves quickly grew to hate, and they didn't play it again from 1996 onwards, although they made a couple of curious attempts to rewrite it. The motorik pulse is replaced by a peculiarly prancing, piano-driven glam-stomp, and like those sleevenote communiques, it's addressed at the Pulp People, at the constituency of outcasts they acquired after 1992. We're defined by being poor, weird misshapen waste products, 'raised on a diet of broken biscuits', so when facing the enemy, we have to use 'the one thing we've got more of – that's our minds'; but we're also defined by certain choices – 'we don't look the same as you, we don't do the things you do', 'we weren't supposed to be, we learnt too much at school'. If it ended there, then that would be one thing – but other, grander associations are courted. 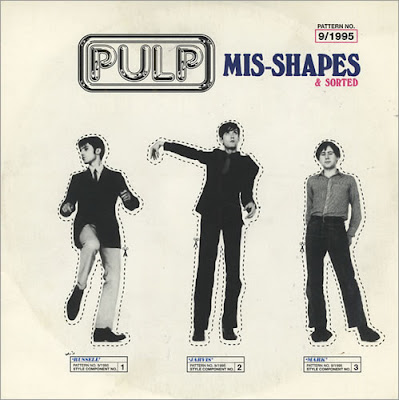 What makes 'Mis-Shapes' so exciting, other than the feeling – lesser than in 'Common People', but still electric – of someone finally finding the right words to convey an age-old grievance – is the way it speaks unashamedly in the language of class war, with the threat aimed directly at property: 'we want your homes, we want your lives, we want the things you won't allow us'; you hear someone who has unexpectedly chanced their way into the unexpected position of spokesman, and seizing the role with alacrity – or rather, using it as the way of avenging the defeats of the past, that hissed 'you think that you've got us beat, but revenge is going to be so sweet' – and there's nothing else produced by Britpop which takes on so fully the role of punk-style upending of received values. Yet though it might present itself as being about class conflict, 'Mis-Shapes' encapsulates rather more a conflict which anyone who went to a comprehensive school or lived in a provincial town in the 1990s will be all too familiar with. That is, the one-sided fights between conformist, violent, sportswear-clad 'townies' and 'hippies'/'moshers'/'goths'/'indies' (otherwise competing tribes pushed into uneasy alliance by a shared and deeply relative nonconformism), fought out in corridors and precincts across the UK. 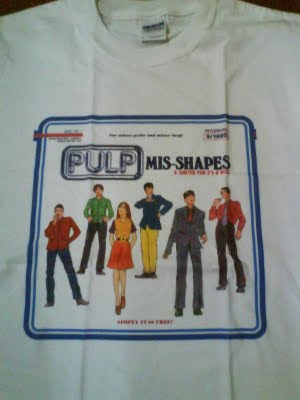 The phrase 'townie' itself – which Pulp used in interviews to describe 'Mis-Shapes'' adversaries - comes from the town vs gown conflicts of University cities. It's the students' derisive term for the inhabitants of the city that they're exploiting (or, more recently, that is exploiting them). It's also used by the teenagers that most probably will soon be students as a counter-insult to the usual 'poof', 'dyke' and suchlike directed at anyone who doesn't quite fit. So it's deeply double-edged. In the context of school, or at a weekend in the centre of town, it's an expression of weakness, a word you direct at those who directly act to make your life a misery; but by the time you're at university, it expresses a far loftier contempt. In that, for anyone who, like the present author, got given a black eye in the centre of town for wearing a 'Mis-Shapes' T-shirt, the song still elicits an intense feeling of belonging. Here is a record that appeared to dramatise our daily predicament in the plainest of terms. 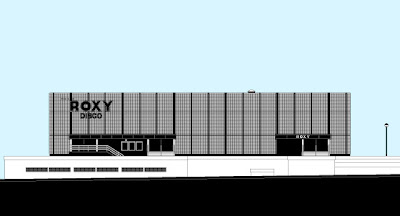 (image via)
In class terms, though, it hardly mapped onto 'haves against haven'ts'. In the mid-90s, judging at least on personal experience, most (if not all) 'townies' were more-or-less working class, raised in an environment which is much more apt to violently enforce conformity, the duress of everyday life causing an all-too-often suspicious attitude to 'difference', towards getting funny ideas. Meanwhile, most (if not all) of 'us' were either middle class or raised at the intersection where the self-educated working class meets the bohemian lower-middle, where reading books were not something to be ashamed of (i.e, with backgrounds like Pulp themselves), and oh, how all of us loved 'Mis-Shapes'! - even the Green Day fans, so perfectly did it describe our literally embattled position. But why are those who torture the 'Mis-Shapes' every weekend so inclined to play the lottery when they're in so much more privileged a position than their prey? You can hear why Pulp were later so embarrassed by 'Mis-Shapes' when it reaches quasi-Albarn sneers like 'what's the point in being rich, when you can't think what to do with it – 'cause you're so bleeding thick'. 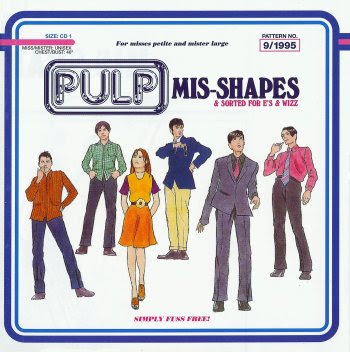 What 'Mis-Shapes' does beautifully – and, irrespective of the group's own disdain, this is a thrilling, totally convincing pop single, one of their best - is lay claim to working-class intelligence against the notion of class as mere identity and ethnicity, sportswear and accents, thuggery and racism. Instead it says we, 'coming out of the sidelines', are the true misfits, those who won't fit either into the tastefully arranged world of the middle-classes or the enforced stupidity of a defeated proletariat. It's enormously exciting as an idea, a call to arms where we will rise up and take over from M People on one side and Oasis on the other, and it's hard not be carried away with its insurgent pride in awkwardness. But it's a fantasy, however wonderful that fantasy might be. We're wrenched out of class-as-essentialism, but where to? A solidarity of clothes and records, of freely-chosen identities as indie kids in charity shop threads?
Pulp - Mis-Shapes przez Pulp
Pedro Romhanyi's video dramatises it in terms as horribly dated and Britpop-ridden as his video to 'Common People', although this one is significantly funnier. We're in a nightclub again, where a townies vs 'us' fight is brewing; 'we' again look like the members of Menswear and Cast, while 'they' are casuals. Yet of a weirdly dated sort – rather than the Ben Sherman shirts and Puffa jackets of the genuine mid-90s thug, they're dressed as the likely late-70s tormentors of Pulp themselves, dressed in Fred Perrys, skinny ties, short skirts, sequins and wedges. 15 years later, it's all completely reversed, as the vintage tracksuit jackets and overgrown Liam Gallagher shagcuts worn by 'us' in the video are much more likely to be the uniform of someone kicking your head in outside Wetherspoons, while the circa-1980 thug-wear worn by 'them' fits perfectly with the never-ending 1980s revival favoured by vaguely bohemian or indie youth. What saves the video is the fact that Jarvis Cocker plays the leader of both gangs, once as 'himself' in brown velvet jacket, once as the evil angry prole alterego in skinny tie and pencil moustache. It's a welcome pointer that the divide is not nearly as clear as the song – and us – wanted it to be. The them and us in 'Mis-Shapes' is wishful thinking, an urge to take the moral force of class warfare and apply it to a rather less righteous fight between the wearers of different jackets. Any real battle between haves and haven'ts would involve some common cause between bullied, intellectual dole youth such as Pulp once were, and the lads and ladies who chased them around town every Saturday. The song still carries, though, the urge to reimagine the divides of class, to produce some sort of alternative collectivity. As a single, it was double-A-side with a song which remembered another moment of failed communalism, a genuine and brief attempt to live in common – rave.
This is an extract from Uncommon - An Essay on Pulp, published tomorrow.
Posted by owen hatherley at 17:14 22 comments:

Email ThisBlogThis!Share to TwitterShare to FacebookShare to Pinterest
Labels: Britpop, Class, get over it mate, misrecognition, Pulp, you think you had it hard

A Literature About Nothing (Or, More Than They Would Care To Admit)


The McSweeneyite clique that nurtured David Foster Wallace is slightly less mass-market than Frey and Ellis, but still a hive of bland, wholesome crypto-cons. Dave Eggers, the nucleus of the group, is pretty much the Bono of literature – a sneering, leathery vampire utterly dependent on the plasma of African children to survive. He began his career by dragging his kid-brother (now long-forgotten) around for sympathy. Then, once little Toph was too pubescent to make a good prop, Eggers dumped him for an ex-soulja-boy from Sudan. Who rarely gets mentioned, though, is his older brother William, an equally ghoulish-looking neocon who was once Director of Government Reform at the Koch brothers’ free-market Reason Foundation. He is also a fellow at the Manhattan Institute, an ultra-right Republican think-tank whose other members have included Charles Murray, author of an infamous book (The Bell Curve) arguing that blacks are intellectually inferior to whites.

Kinda puts a damper on Eggers’ goody-goody pretensions, doesn’t it?

"My mind, I know, I can prove, hovers on hummingbird wings. It hovers and it churns. And when it's operating at full thrust, the churning does not stop. The machines do not rest, the systems rarely cool. And while I can forget anything of any importance--this is why people tell me secrets--my mind has an uncanny knack for organization when it comes to pain. Nothing tormenting is ever lost, never even diminished in color or intensity or quality of sound."

Dave Eggers You Shall Know Our Velocity

"I worry about exposing him to bands like Journey, the appreciation of which will surely bring him nothing but the opprobrium of his peers. Though he has often been resistant - children so seldom know what is good for them - I have taught him to appreciate all the groundbreaking musicmakers of our time - Big Country, Haircut 100, Loverboy - and he is lucky for it. His brain is my laboratory, my depository. Into it I can stuff the books I choose, the television shows, the movies, my opinion about elected officials, historical events, neighbors, passersby. He is my twenty-four-hour classroom, my captive audience, forced to ingest everything I deem worthwhile. He is a lucky, lucky boy! And no one can stop me."