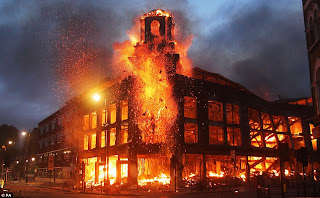 London is a city few people understand, and those that are least likely to understand it are its residents and its proselytisers. The reason so few understand it is because hardly anyone knows that London possesses a deep, dark secret. It's a secret I found out quite by chance in the mid-nineties, and have kept to myself ever since, largely because so few people I could tell it to would recognise it, and, even if they recognised it, would be prepared to ever admit it.

The first job I took after I left university in 1994 was as an engineer installing escalators on the London Underground. This was a time when London Underground Limited was well into a programme of refitting every single escalator in its stations subsequent to the King's Cross fire of 1987, in which the old wooden-step escalators were (erroneously) suspected of contributing to the conflagration that had resulted in the death of 31 people, and were to be replaced with brand new units, such as the ones my company manufactured, that featured steel and aluminium steps.

When you step onto an escalator on the Underground, what you may or may not realise is that underneath your feet is another large room, at least as big as the concourse in which you are standing. This underground room is where the escalator is maintained, which is why you never see anybody working on a stopped escalator - all the maintenance is carried out underneath. This underground room possesses an upper chamber, where the escalator controls are mounted (that regulate the escalator's speed, the co-ordination between steps and handrail etc.), a concrete staircase that leads down between each pair of machines, and a lower chamber. Behind the lower chamber, sealed off with a dividing wall, is the pump room, where a water pump operates to ensure the chamber is not flooded by ground water.

We were never allowed to enter the pump room, which was the responsibility of a different company, but what struck me at the time, in every station that I worked, was just how noisy the pumps were. Rather than a slow, muffled thump, the pumps emitted a rapid dakka-dakka-dakka, as though they were at the very limits of their operation. One night, however, while I was in one of the lower chambers at King's Cross, the maintenance engineers for the pump turned up for a scheduled inspection. I took the opportunity to peer through the open door of the pump room, and was amazed to see that not only was the pump indeed operating at an almost manic speed, but that the sunken floor in the pump room was under about six inches of water. Despite my alarm, the pump crew assured me that this was "normal".

The reason why the pumps in the Underground were all working flat-out, I was to subsequently discover, was that the water table in London was rising, and had been since the end of the Second World War. Surprisingly, far from this raising of the water table being the result of human "development", it was quite the opposite - London's water table was returning to its natural level. What had kept it well below its normal level was the fact that up until the 1950's, the ground water had been heavily utilised by London's extensive manufacturing industry. Nowadays we are unfamiliar with the idea of London being a centre for industry, but it was in its heyday one of the great industrial cities of the world, all be it mainly specialising in light and medium industry (the most profitable kind, it should be said).

The disappearance of London's industry was partly a sympton of the general decline of British industry in the post-war years, but it was also partly due to the decline of London as a port with the adoption of freight containerisation - there was no longer any point in locating a factory in proximity to London's docks if you were actually importing and exporting via Harwich or Felixstowe. It was this realisation that the capitol had lost it's two main raison d'etre's - its function as a port, and its purpose as an industrial city, that lead me to comprehend its deep, dark secret: that London is obsolete.

Which is another way of saying that London is dying. It is dying in the same way that Glasgow, Birmingham, Manchester, Sunderland, Liverpool, Sheffield, Belfast and all the other major British industrial cities are dying. And once I understood that London was dying, everything that happened there started to make sense: the inner-city riots of the 1980's, the chronic under-investment in transport that had led to the fire in the room in which I stood, the Big Bang that tried to breathe new life into the metropolis via unhinged credit expansion, the bizarre obsession with "vibrancy" that revealed the underlying fear of cultural death.

London had become a city that no longer made anything of substance; it only made words and images. It's proselytisers would speak of the "culture industry", but ultimately what it was making was simply guff.

I've lived in three of those 'dying' cities you mention. However, the amount of DJs and web designers I've lived next door to proves that they're all thriving! Tony Blair said so a few years back, remember?

Ah, if each one is providing a few hundred people with a living wage, like all those grimy old "sunset" industries used to do, then there's no problem at all...

You’re right the creative middle classes would never let light industry back into London, even if it guaranteed full employment.

Into the 1960s there was a liquorice factory in King's Cross. It was demolished and the site is now where a UCL Halls of Residence is.

London's breweries used to do much of the work of keeping the water table down.
I live in Mid Wales where, whenever there's a bit of a dry spell in the South East of England, we are told we are going to have to flood more of our valleys to provide water for London. Every time I've tried to tell people that the London basin has, in fact, too much water, I've been laughed at. Nice to see someone else has noticed, at least.

The first 20 or so years of the post-war period also brought an end to London as the capital of an Empire, so it was no longer busy managing precious resources which had been extracted from colonised nations like India and those of Africa.

When I travel overground in London I always think of how the grandeur of London's historial architecture is a vestige of those years of plunder.

The recovering water table is also the reason why the British Library's basements had to be built from the top down: if they had simply dug a very deep hole and lined it with concete the ground water pressure would have floated it up. So they built the ground level slab first, then excavated downwards... No sign that they are doing the same now next door at UKCMRI. Know any engineers?